They say that are books and there are BOOKS; there are stories and there are STORIES. With thousands and thousands of book titles being written each year, we are inundated by information overload. Not to mentions the zillions of gigabytes of data available online the indexing of which alone will take more than a human lifetime, let alone reading and understanding the same. But every era produces a few literary giants that leave an inedible mark on their time and whose books serve as the leading light for the generations to come. One such remarkable novelist was George Orwell, born in 1903, who has been immortalized by two cult classic novels of his named the Animal Farm and 1984 on which we take a brief look. 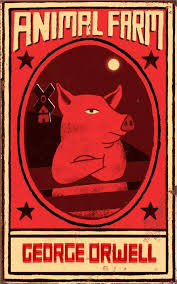 Based on the Totalitarian regime under Stalin in erstwhile U.S.S.R, this novel is the story of animals of a farm that kick out the owner and take over the control of the farm. The trials and tribulations they face and how the original ideals are lost in internal power struggle and dictatorship are brought about is vividly portrayed in this book. The parallels with Soviet Russia, the Bolshevik Revolution and the police state established by Joseph Stalin are hard to miss. The beauty of this book lies in the fact that the story works on two levels – first, the obvious story on how animals try to manage their affairs and find that power corrupts – be it humans or animals. Secondly, the story serves as an analogy or metaphor on how the noblest of ideas get toxic when the blackness of meanness, the selfishness of human spirits invade them. One of the most famous quotes from the book is “all animals are equal, but some animals are more equal than others.”

Though on one level the book is the continuation or spread of theme of the novel Animal Farm, this story is different as it is based in England in the year 1984. The book tells the story of Winston Smith under a totalitarian regime that has established itself in England and is based on ‘English Socialism’. What marks it different from other dictatorship is the almost TOTAL control it tries to achieve on every aspect of the life of the individuals. Not only what they do, where they go or associate themselves with but also what they think.

In this Orwellian universe; nothing is private, except perhaps the few inches of space deep inside your head. But even that is an illusion because sooner or later you are betrayed to the authorities and the ‘thought police’ comes to pick you up.

At top of the heap in this totalitarian state is the mythical figure of ‘Big Brother’, who controls everything and everyone. In typical Orwellian style the brutal secret service is called ‘Ministry of Love’, the ‘ministry of peace’ is engaged in War and ‘The Ministry of Truth’ is the department involved in falsifying old data including all backdated newspapers and books. The famous slogans of the party are:

Some of the concepts and terms immortalized by this book and in common use to this day are double-think, New-speak, Big Brother and memory hole.

To sum up; both novels stand out on the strength of their plot, characters and the heart and soul their author put in them, even while suffering from life-threatening Tuberculosis. On an ethereal level, they tell the dangers of accepting totalitarianism in our everyday lives which ebbs away the freedoms we take for granted. Questioned once on how he saw the future, George Orwell famously replied, “If you want a vision of the future, imagine a boot stamping on a human face – forever.”

Promote Your Page Too

Visitors to the Blog

A glimpse into the mind of a wanderer.

Marketing With A Story

Author of a Mystery Thriller Novella Trilogy. Initiation was released on 5/15. Innocence will be released on 6/16 .

Morgen 'with an E' Bailey

You can't break up with a soul mate

The latest news on WordPress.com and the WordPress community.